1- Do Not Sweep or Clean or Take Out Garbage:

Negative words that have negative connotations are strictly forbidden. These words include: poor, sick, death, empty, pain, break, ghost, and more. Chinese think these words may affect their lives if they use them on new year’s day.

You can not eat porridge breakfast because they considered the poor people to eat this and the Chinese people don’t want to start their new year poor. Also eating meat in the new year’s day is forbidden.

4- Do Not Take Medicine:

Chinese people avoid taking medicine on the very first day of the Chinese Lunar Year because they think if they take medicine on this day they will get ill for whole the year. In some areas, sick people break their medicine pots considering this act will drive away from the illness in the coming new year.

Chinese people avoid needlework on this day. They avoid using any kind of sharp objects like knives and scissors on this day as these tools are associated with an accident, or cut your success and wealth in the coming year. Due to this reason, 99% of hair salons remain closed during the holidays. 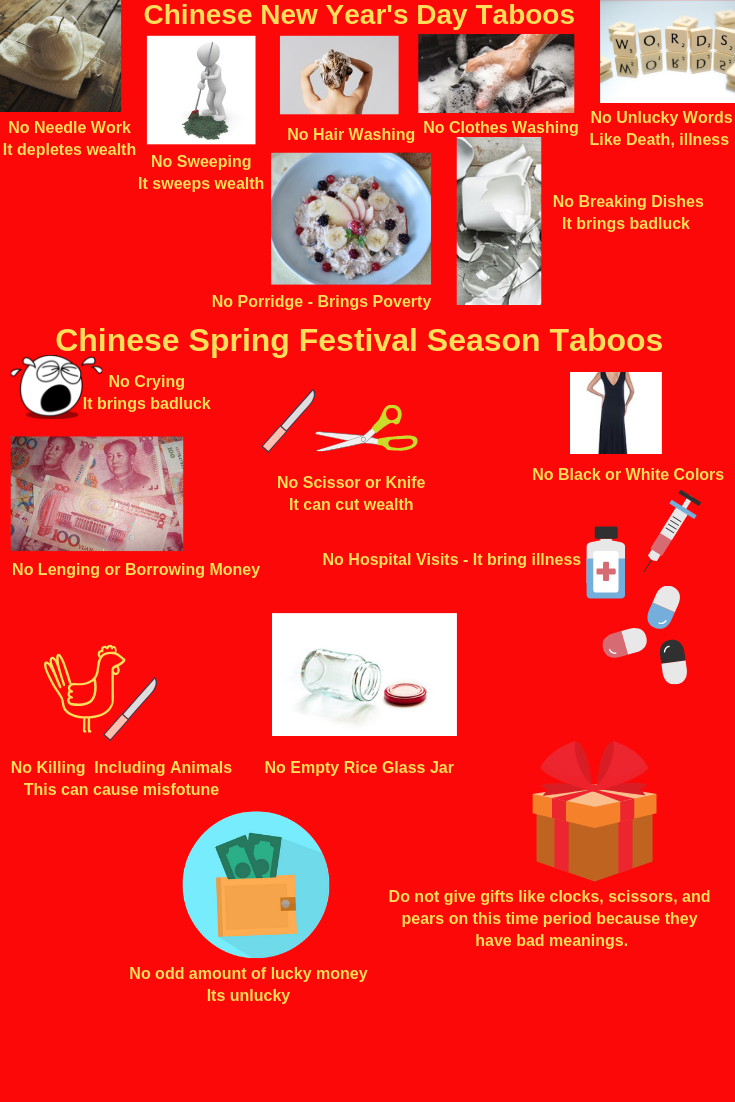 Breaking glass or ceramics is strictly forbidden during the Chinese Spring Festival Season because the Chinese think that things can break your prosperity and good fortune. If a bowl or plate dropped from any person he or she immediately wrap the bowl or plate with red paper and say 岁岁平安 (suì suì píng ān). After the New Year, they will throw the wrapped bowl or plate into a river or lake.

During the Chinese Spring Festival, the Chinese people avoid to take lending or borrowing money or repayment and this taboo is associated with bad luck for both parties. Also, it leads to debt for whole the year if you do this act. However, it is considered fair after the 5th day.

3- Avoid Crying And Fighting:
During the Chinese Lunar New Year Spring Festival Season try to avoid crying and fighting. This taboo is associated to bring bad luck to the family. Children crying is also forbidden and parents need to do their best to stop crying by all possible means.
4- The Rice Jar:
This taboo is associated with grave anxiety, cooking issues, and ill omen during the New Year time period so the Rice Jar should not be empty in any case.
5-  No Killing: This taboo is associated with ill omen including bloody disaster, accident, knife wounds, and misfortunes, etc.
6- Damaged Clothes: Avoid wearing new damaged clothes because it considered that if kids use these kinds of clothes in the first lunar month of Chinese New Year bad luck will come.
7- Try To Avoid Certain Type Of Gifts: Do not give gifts like clocks, scissors, and pears on this time period because they have bad meanings.
8- Don’t Wear White or Black Clothes: Chinese cannot wear white and black clothes during the spring festival because this Chinese New Year Taboo is associated with mourning.
9- Breaking Tools or Other Equipment: This taboo is associated with a loss of wealth. Therefore businessmen try their best to prevent it.
10- Theft: Due to the cause of stolen wealth and money in the coming year Chinese people try to avoid theft and take care of their things very well.
11- Hospital Visit: People try to avoid visiting the hospital during this period because it is believed that it will bring illness for the whole coming year. However, in case of extreme emergency, they go to the hospital.
12- Bed Person Not Receive New Year Blessings: The recipient cannot receive New Year’s blessings until he or she gets up from the bed first. This taboo is associated with bed-ridden for the entire year. Also, you can not tell others to wake up and rushed around for the year. Sleep in by taking advantage of this.
All these Chinese New Year Spring Season Festival Taboos are applied from the 1st to 15th of the first month of the new Lunar New Year.